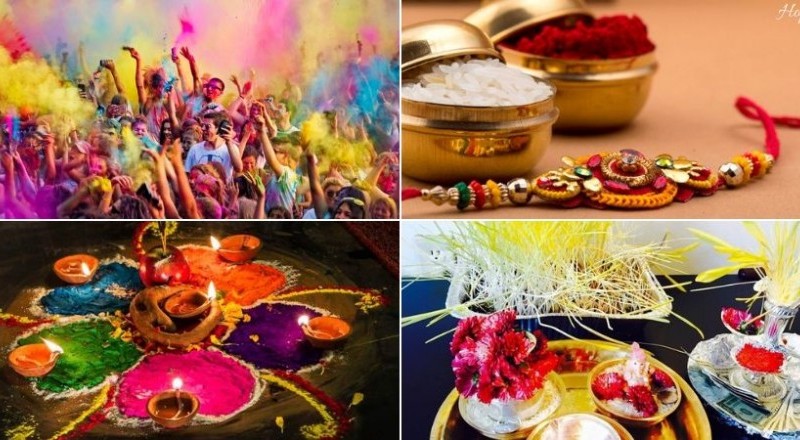 Known to the world as the land of mountains, Nepal is distinctly known as the country of colorful vibrant festivals. There are more than 50 festivals in Nepal that are celebrated every year, some having fixed dates and some set by astrologers following the lunar calendar. The festivals distinctly have religious associations or are based on some ancient important events.

Despite having diverse beliefs and ethnic backgrounds, all Nepalese unite together in the celebration of the major festivals. Due to the variation of culture, every day in Nepal is a day of celebration for one or another community. Since one’s pride in one’s culture and has respect for others’, the numerous festivals harmoniously coexist in Nepal.
Here in this article, we have tried including the popular festivals celebrated by the majority of people.

As about 80% of the Nepalese people are Hindu, Dashain is considered to be a major festival of Nepal. Dashain is a celebration to rejoice the victory of good over evil. Dashain usually falls during late September and early October and every person In the country gets indulged in the biggest festival of the year.

The festival initiates with Ghatasthapana, the first day of Dashain marking the beginning and is observed for 15 days. Every Nepali family worships the Astha Matrikas ( 8 Tantrik Goddesses) and the nine Avatars of Durga for nine days also known as Navaratri. The tenth day of Dashain is the huge deal as this day we receive Tika and Jamara along with the blessings from the elders.

The Dashain tika lasts for about 5 days. The last day of the festival is on the full moon day marked as Kojagrat Purnima. Even though Dashain has been celebrated among the majority of Nepalese, the way of celebration varies according to the ethnic groups.

The first day of Tihar is patent by worshipping crows who are believed to be the messenger of Yama( the god of death).; As the dogs are believed to be the protectors of Yama, they are worshipped on the second day of the festival. The third day is dedicated to worshipping the Goddess Laxmi, the bringer of wealth. Oxen is worshipped on the fourth day.

The last day of Tihar is celebrated as a joy to a pleasant bond between the siblings . On this day, the sister puts tika on brother’s head to wish them a happy life whereas brother promise to protect their sisters.

Teej is a festival for women that occurs around the month of August before Dashain. Teej lasts for two days and women are seen draped in red sarees, wearing tika bangles and singing and dancing to traditional folk songs. Teej is especially significant for married women as the festival is dedicated to women fasting to pray for their husband’s well being and prosperity.

The women take 24-hour long fasting, where most of them do not even drink water. The fasting is followed by a long feast called dar, where they are invited to visit their maternal home for the feast. What is fascinating about Teej is to watch women of all age groups, young and old sing and dance without eating for an entire day.

Symbolized as one of the popular festivals, Holi is also known as the festival of colors.The festival of Holi occurs in full moon day in the month of Falgun and is often called as Falgu Purnima. This colorful and playful festival is celebrated in Terai on one day and in Kathmandu and the hilly region on the next day.

The festival is a celebration of the victory of good over evil. During this colorful festival, people are seen in smearing colors and water over one another. The Holi festival also marks the arrival of spring as the days start to get warmer after the Falgu Purnima.

Also known as Maha Shivaratri, the Shivaratri festival is one of the greatest festivals for Hindu devotees. The name literally is composed of two words, Shiva, and Ratri where Shiva is the name of Hindu God (believed to be the destroyer) and Ratri meaning night. The best place to witness the craziness of this festival is at the Pashupatinath temple of Kathmandu.
Unlike other festivals, the Maha Shivaratri is celebrated at night. Many devotees spend the night around the temple, lighting sacred fire and singing praises to Lord Shiva. People sing the tales of Lord Shiva to grave this remembrance of overcoming darkness and ignorance.

There is a saying among the Hindus reflecting the Maghe Sankranti as the change of season and the festival that welcomes summer. Maghe Sankranti, therefore, is a festival of worshipping Sun. The Hindu god Sun is often known as the symbol of power and wisdom and this festival devotes it’s faith to such power.

The day is initiate with people taking bath at the holy rivers. Til ko laddu, chaku and tarul is something you wouldn't want to miss during the Maghe Sankranti festival.

New year marks the beginning of the year and is the first festival in any year. This auspicious day is often celebrated with family gatherings, parties and a lot of activities that resemble fun family moments. Since there are more than 60 ethnic groups in Nepal, every group has a different culture, tradition, and custom that reflects on how they celebrate the initiation of the New year.

Celebrating New year’s day is a matter of joy as it involves welcoming a prosperous year ahead and bidding goodbye to the old one. We Nepalese express our wishes that the New year will be filled with health and happiness to our dear ones and feast over this happiness.

The Lhosar is a festival exclusively celebrated by the Buddhist community or the people from the Himalayas in Nepal. The Lhosar is Tibetan New year and since the people on the northern side of Nepal are influenced by the Tibetan culture, Lhosar is an exclusive festival devoted to one community.

The festival of Lhosar is celebrated by dancing, singing and feasting with people gathering around the stupas all dressed up in a wide variety of traditional costumes representing Gurung, Tamang, and Sherpa. These three ethnic groups celebrate Lhosar on a different day in a different manner and it is called “ Tamu Lhosar” for Gurung’s celebration, Gyalpo Lhosar for Tamags and Sonam Lhosar for Sherpas.

Chhath is an important festival observed mostly in the South East Terai region. The festival of CHhath occurs on the 7th day of the Tihar and is a three-day festival. The Chhath Parva attracts thousands of pilgrims to the holy town of Janakpur (The Mithila Kingdom) every year.

Chhath is a three days festival where the first day is spent on cleaning the kitchen and preparing for the fast. On the second day, the devotees fast from the morning and gather around at the bank of the river during the evening to make offerings to the fading sun. The devotees then return back home after the sun goes down.

The worshippers of the Chhath puja are generally women with most men just watching and helping around. The same process is repeated till the fifth day. This ritual is believed to protect the families of the devotees from evil.  When the pooja is over, the offerings are distributed and the women break their fast.

Nepal is immersed in myths and legends. More than hundreds of festivals are celebrated every year. Every little festival has a huge back story that supports its existence. You could try exploring these interesting festivals on your visit to Nepal.

Since it is not possible to include every festival in one article, there are a lot of other festivals in Nepal that represents various regions and communities. No matter which time of the year you visit Nepal, you will be rewarded with a festive experience in this colorful land of festivals.