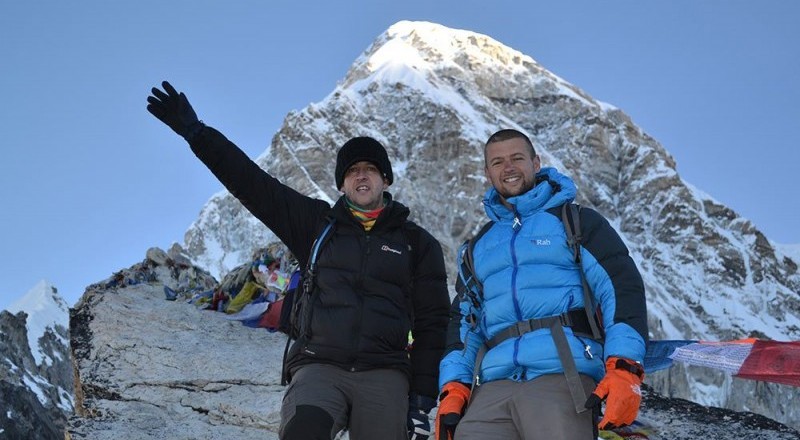 How long does it take to trek to EBC?

Everest Base Camp (EBC) is one of the most trekked trails in the country. Walking with the highest mountain in the world in the backdrop shall be the feeling throughout the trail. The coveted Mount Everest makes the trail the mesmerizing but what adds to this serenity are the other mountains and glaciers en route.

Even if one can not make it to the top of Everest, the resilient beauty of the mountains and glaciers are jaw-dropping for sure. The thrilling moraines and the enthralling trails won’t let your excitement stain a little bit.

The Everest Base Camp takes almost two weeks to complete the trek. The trek days, however, depends upon the person’s experience in trekking which can elongate if the person is a novice trekker. The culture there is exciting as well.

The area is hugely populated with people following Buddhism and the Sherpa community observe their own tradition adding to the beauty of the trek. Kala Patthar is the viewpoint of the trek which offers us the closest view of Mount Everest. The picturesque panorama of the Khumbu valley offers one with a million photos for memories.

While the enticing trek allures us, the warm Sherpa hospitality adds beauty to the beautiful trek. The other major attraction is Sagarmatha National Park, which has abundant flora and fauna for the enthusiasts.

The trek generally takes two weeks to complete but this totally depends upon the route one follows. Arriving at the Lukla airport and commencing the journey shall not take more than two weeks. However, depending upon the route, the trek might take as long as a month to complete it. Apart from arriving via plane, other options could be trekking through the trails of Jiri to arrive at Namche. Another option could be walking through the snowy trails of Rolwaling valley. Commencing the trail from Lukla, the trek shall be completed in two weeks if the following itinerary is to be followed.

Day 1: Kathamndu to Lukla to Phakding

Lukla is at an altitude of 2800 meters and the flight from Kathmandu is almost thirty minutes. The thirty minutes flight over the lush mountains is a serene view one will be allured by. It is better to be with the potters if you have a lot of baggage to take care of. Else, cutting the potter's price would be legitimate as well. Phakding is at an altitude of 2652 meters and approximately 4 hours walk from Lukla. Acclimatization is the thing one should be serious about while traveling in the Himalayas. So the first day should be at Phakding for acclimatization purposes.

Namche bazaar is the hub of the Everest region. At an altitude of 3440 meters, Namche has abundant hotels to choose from. The facilities provided are appreciable. It would take almost 10 hours to arrive at Namche.

After walking for more than 10 hours the previous day, it seems necessary to take a rest for a while. Also for acclimatization, the rest is recommended. Here you can see around the museum and monasteries.

Tengboche is at an altitude of 3870 meters and takes almost 6-8 hours to cover the distance between Namche to Tengboche. The jaw-dropping views of  Everest, Lhotse, Ama Dablam , etc. treat the eyes. The Tengboche monastery is the largest in the Khumbu region.

As the trail ascends, we will arrive at Dingboche which is at an altitude of 4400 meters. The distance between Tengboche to Dingboche is almost 12 kilometers and will take us almost 6-8 hours. When in time, the trail is covered with beautiful rhododendron forests. Pangboche Monastery is one of the oldest monasteries in the area.

Day 6: Rest and acclimatization at Dingboche

The previous day sees some hard treks and a rest day at Dingboche is a must. Dingboche offers a lot of serenity to cherish. And engaging yourself within the valleys of Imja and Chhukung should not be boring even a little bit.

The trek goes further uphill when we leave Dingboche. Arriving at Lobuche, we will be at an altitude of 4900 meters. The vegetation has scarce by now and only shrubs and herbs are seen. Dingboche to Lobuche is almost 12  kilometers and takes 6-8 hours to complete the journey. The environment is chilly up here and the trails are through the moraines. The mountains are alluring and the nights can be very cold.

The day is very busy as we have to visit the Everest Base Camp and come back to Gorakshep. Starting from Lobuche, we arrive at Gorakshep which is situated at an altitude of 5180 meters. Further up the mountains, we will arrive at Everest Base Camp which is at an altitude of 5364 meters. The view today will be breathtaking starting from early in the morning.

Day 9: Gorakshep to Kalapathar to Pheriche

Kalapathar is at an altitude of 5545 meters and offers the most spectacular view of the mighty Everest. Kalapathar is the highest point in the journey if you are not planning to go further than the base camp. Further, we will descend to Pheriche which is situated at an altitude of 4320 meters. It will be a 6-8 hour long trek this day.

After arriving at Pheriche, the trail follows all the way back to Namche. The distance is almost 15 kilometers but as the trek is down the hill, it shall not take more than 8 hours. Namche is at the altitude of 3440 meters and the journey is accompanied by lustrous mountains.

Day 11: Namche to Phakding to Lukla

The trek sees a familiar trail walking alongside the mighty mountains. It’s not always the natural beauty but sometimes it’s the culture as well. We can enjoy the Sherpa culture today.

The thirty minutes flight flies over the lush mountains back to where the journey was commenced. It won’t be a good feeling bidding good-byes to those lush mountains but the ecstasy of being there shall be unmatched.

Kathmandu is a city that is immensely enriched with culture. This city is a hub to the historical and archeological masterclass. With the likes of Swayambhunath, Bhaktapur Durbar Square, etc. spending a day sightseeing around the valley is obviously a must.

Another exciting trail to Everest Base Camp is via Jiri which suits more to the ones who love plunging into the wilderness to test their fortitude. This lesser trekked trail takes almost 3-4 weeks to complete and even though this takes more time, the trail sees no problem with altitude sickness as acclimatization is better. The beautiful scenery en route does not let the serotonin drip a little bit.

Following itinerary for Jiri to EBC hiking can be followed:

Day 16: Lobuche to Gorak Shep to Everest Base Camp

Day 19: Gokyo to the Fifth Lake

Another option to these could be via Rolwaling valley. En route Everest via this trail, we will witness the largest glacial lake of the country, Tsho Rolpa lake. The trek is more strenuous and altitude sickness can be a major problem. This trek will be completed in almost three weeks.

This trek, however, offers a lot of natural beauty as the route is the home to numerous endangered flora and fauna. Starting from Charikot, this trek meets Namche on the 14th day and the trail is the same as the previous here onwards.

The duration to complete the Everest Base Camp trek will depend upon the route you follow and the itinerary. Besides the route, physique and past experience should come when it comes to finishing the trek in time.

One thing that keeps motivating is the self-belief. The different routes have different stature and one shall choose the trekking days and the routes as per one wishes. From trekking in a rather busy and shorter trek to trekking via longer but tranquil trek, you will have options to complete the Everest Base Camp trek.