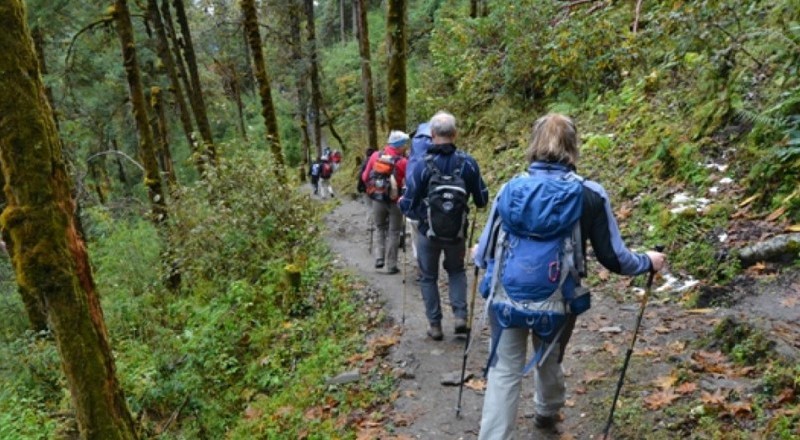 Why is Nepal known for hiking and trekking?

If asked what Nepal is famous for, one would take no time to answer for it stupendously rich natural beauty. The answer is spot on as there are thousands of places one would be astonished by in the country.

From the world’s highest mountains to the diversified flora and fauna, Nepal is a heaven to the people who seek ways to escape the hectic life in the bustling city. Be it the adrenaline rush or the peace and complacent one seeks in their hard-earned, Nepal entertains in every one of these.

The land structure on Nepal is diversified in such a way that travel enthusiasts can travel as per their wish be it the strenuous mountains or the smooth terai. The rich geographical diversity offers both a short hike and a month-long trek. So there are a lot of alternatives to choose from.

Surrounded by the two big countries India and China, Nepal is a landlocked country. However, Nepal is rich in water resources and you will the evidence of the fast-flowing rivers commencing their journey from the high mountains. Nepal is the home to eight mountains above 8000 m height from the sea level. The highest, the Mt. Everest stands 8848 meters tall.

With this diversified land topography, one can witness different flora and fauna while trekking in this beautiful country. The climate in Nepal is diversified as well as the mountains are extremely cold and the terai can get extremely hot. The hilly region entertains mild climate.

The mountains are the major attraction for trekking in this country. There are several mountains in the country which can be summited. The Everest itself has been a subject to the summit to several climbers in the last year. Besides the Everest, other achievable mountains are Langtang and Annapurna.

Nepal is a nation with a lot of beliefs and for some reason, some of the mountains are not subjected to climb while the others are too dangerous to climb. The Manaslu mountain is known as the Killer Mountain while the Ganesh Himal carries religious beliefs and it is prohibited to climb. Several peaks are ranging from 5000 meters to 6000 meters which are often summited.

The likes of Meera Peak, Peekay Peak, and several others see a lot of climbers summit them. Even though all peaks are not achievable, one can always visit up to their base camp. The base camp offers a magnificent view of the pompous mountains standing tall right in front. It feels like one could reach out to the mountains and try to push them but it ain’t that easy.

However, reaching even the base camps and taking a long glare to the lofty mountains is still the biggest fantasy for many people and Nepal offers with immense choices for such people to come and live their fantasies in real life. Apart from the mountains, trekking trails in itself is enriched with fascinating sightseeing scenery.

The swift-flowing mountain rivers, gorges formed by the flowing rivers and the carvings on the rocks made by the rivers, some occasional sights of rare birds and wild animals make the trek even more interesting and due to this reason, thousands of trekkers are lured to come and trek into Nepal.

Not only international but domestic trekkers seem to be more attracted lately and are keen to enjoy every ounce of heavenly views that the treks have on offer and feel every drop of adrenaline running through their veins. This is one of the reasons of Nepal being famous in trekking and hiking.

Some of the small treks in terms of duration of treks include Balthali Village Trek, which can be completed in 3 days, located on Kavrepalanchowk district offers an amazing view of the Gauri-Shankar Himalayan range, Newar community in Panauti and several other Newari sculptures and cultures.

Another short trek is Ghandruk Trek, which is also a 3 to 4 days trek where trekkers can enjoy the views of the Annapurna Himalaya range.  Narayanthan (dhunkharka)  is another short trek that can be completed in 2 days maximum, is located in Kavrepalanchowk district.

The trek starts from Dhunkharka (a village in Kavre district) which is a 3 hours walk upwards to witness the highest point in Mahabharat range along with the panoramic views of the lofty Himalayas and mesmerizing sunrise and sunsets.

Nagarkot, Chisopani, and Sarangkot have been some famous short treks people have loved lately, where each of these places offers an exquisite view for sunrise and sunset along with exploring local cultures and villages under the panoramic belt of the Himalayas. Similarly, there are many other such shorts hiking places like Lantang Trek, Gosaikunda trek, Panchpokhari Trek, etc and many other for trekkers with limited time and low budget vacation.

Besides, Nepal offers various long treks with some next-level fitness test of hikers and trekkers with equally justifying landscapes of the lusty Himalayas, breathtaking glacial ponds, and rivers.

Some of the long treks in Nepal include Manaslu Circuit Trek, normally it takes around 16 days to complete in which one can experience the vivid views of Manaslu. The trek offers a challenge to walk up to 5135 meters. Everest Base Camp Trek, which can be completed in 13 to 15 days, offers a close view to the world’s tallest peak Mount Everest.

Along with the fascinating views of Everest itself, the trek also offers breathtaking sightseeing of landscapes to the people, also the trek adds up the challenges and thrill to the trekkers as they have to trek at an altitude of almost 5200 meters.

Annapurna Base Camp Trek, which can be completed in 16 to 18 days, is considered one of the best treks throughout the world. The trek offers the people to travel through Lamjung, Manang, Mustang, and Myagdi with plenty of natural as well as cultural aspects to be replenished for the trekkers as life long memories.

The trek can be challenging in terms of both time and altitude one has to travel during trek which is 5416 meters. Similarly, other long treks in Nepal include Upper Mustang Trek, Kanchenjunga Base Camp Trek, Lower Dolpo Trek, and many others.

Be it long or short trek each of the treks has been offering a unique call to the trekkers to come to Nepal and of seeing the blend of nature with their own eyes. Also, people have been barging in large numbers and they have been quenching their thirst of nature through different trekking and hiking that Nepal has been offering.

Also, the people in Nepal have been so supportive and kind to the tourists to be international or domestic with their hospitality and warm welcome. Such gestures have been encouraging them to believe in their belongingness with the country and with nature, which has ultimately increased the number of trekkers and hikers in Nepal.

Also, people recently have developed themselves an urge to testing different foods and cultures of different tribes resident in the country, so they travel to different places to taste cuisines of different cultures and luckily.

Nepal is a blend of such different cultures where such person can get to know about different cultural foods in a single trek as a different tribes of people can be found during a trek as we move along from hilly to Himalayan region of the country. So, such trekkers are also increasing immensely in Nepal.

In conclusion, be it for some adrenaline junkie or a trek rookie, Nepal has many things to offer for every category of people, long treks that last for half a month to treks that can be completed in 2 or 3 days. So a lot of people are drawn into trekking in Nepal.